Stunning beaches and friendly coastal towns beckon, while inland you’ll find historic mining villages and spectacular national parks. Blessed by nature and embraced by sea, Yorke Peninsula is only two and a half hours’ drive from top to bottom and around 30 minutes from coast to coast. It’s home to magnificent beaches and jagged shorelines, friendly locals and rich farmland. With its distinctive ‘boot’ shape, Yorke Peninsula boasts more than 700 kilometres of coastline, so it’s easy to find the perfect beach spot.
View this article. 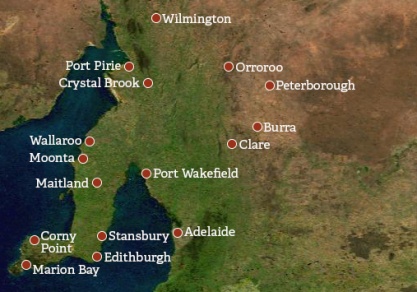 The Yorke and Mid North region is renowned for its diversity and beauty ranging from superb rural panoramas to rugged coastal locations and culturally unique townships and settlements. The region extends across approximately 35,000 square kilometres and currently has a population of 74,249 people, representing almost a quarter of the regional population of South Australia.

The largest centre in the region is Port Pirie with a population of 14,281 people with the townships of Kadina (5,121), Moonta (4,244), Clare (3,984), and Wallaroo (3,704) forming the next distinctive tier of population concentration in the region. Towns such as Peterborough, Balaklava, Crystal Brook, Jamestown, Ardrossan, and Maitland are other recognised service hubs in the region, all with populations of between 1000 – 2000 people.  The Indigenous population was 1.7 per cent, which just above the overall State average.

Extractive industries are well established in the region (e.g. limestone, dolomite, gypsum) and the only food grade salt producer in Southern Australia is located at Price. Mineral and energy exploration is continuing, with a number of companies progressing to the start-up phase. Proximity to developing mining projects in the north and east of the state, and the region’s strong industrial base, has resulted in local businesses securing contracts associated with the mines and the commencement of feasibility projects associated with mineral processing within the region. There has also been a more intensive use of the wharf facilities located at Port Pirie.

Broad acre cropping and livestock production remain important employers and significant contributors to the regional and state economy, generating annual revenues of $460 million and $260 million respectively. The region has numerous educational facilities. There are currently 97 public and private schools that include Aboriginal, pre-school, primary and secondary campuses. In addition, there are 6 TAFE SA Regional campuses located in the towns of Port Pirie, Clare, Kadina, Jamestown, Peterborough and Yorketown.

Ready access to health services is also available within the region through 19 public hospitals and health service centres. The main health hub for the area is the Port Pirie Regional Health Service with other facilities located nearby. These services include accident and emergency, day and in-patient surgery, Aboriginal Health, obstetric services, community health and aged care services.

For more information on the Yorke and Mid North Region, including employment opportunities visit: here

When you walk into a building and notice that the furniture, wall coverings, fittings and accessories all work together to create a theme, there's a good chance that an interior decorator has been at work. Interior decorators assist clients to select and co-ordinate the different elements that make up the interior of a room or a building.