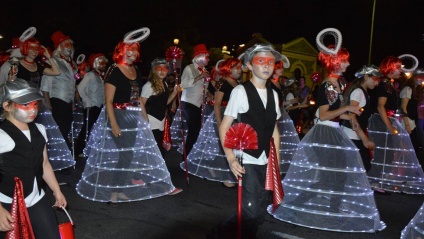 Unlike a curated festival, the open-access nature of Adelaide Fringe means that anyone with a show, exhibition or cultural event is able to register and be part of Australia’s largest arts event. The result is one of the most diverse arts festivals in the world, renowned for fresh ideas, spontaneity and fun.

Artists from around Australia and across the globe participate alongside home-grown talent, in art forms spanning cabaret, comedy, circus, dance, film, theatre, puppetry, music, visual art and design. Adelaide Fringe literally takes over the entire city with 900 events staged in pop up venues in parks, warehouses, lane-ways and empty buildings as well as established venues such as theatres, hotels, art galleries, cafes and town halls.

Aside from the Fringe Club, Adelaide Fringe does not run venues itself. However, what it does do is advise, encourage and assist venues to be as successful as possible, both artistically and financially. This includes facilitating the matching of artists with venues and providing scheduling, programming, funding, marketing and publicity advice. Key to the operation of Adelaide Fringe is its role to support, encourage and facilitate registered artists, presenters and venues. It works to ensure that artists and presenters have the best possible experience, right through from the registration process to their performances and exhibitions.

What differentiates Adelaide Fringe from many other Fringe Festivals in the world is that alongside the ticketed open access program are the Fringe produced and/or supported special free events, which run throughout the program. These events add to the carnival atmosphere that engulfs the entire city and include the Fringe Parade, Adelaide Fringe Street Theatre Festival and Fringe in the Mall.

For independent artists, Adelaide Fringe is an inspirational environment to showcase their work. For audiences, it’s an opportunity to see exciting and entertaining contemporary work in an atmosphere that encourages taking a chance and seeing and discovering something new.

To find more about the Adelaide Fringe: here and to purchase tickets: here