The Barossa RDA has several programs to support business migrates looking to set up a business in their region.

One such program is the Business to Business Barossa program which is a free program that connects skilled service providers with local small and medium enterprises (SMEs) looking for help within their business.
View this article. 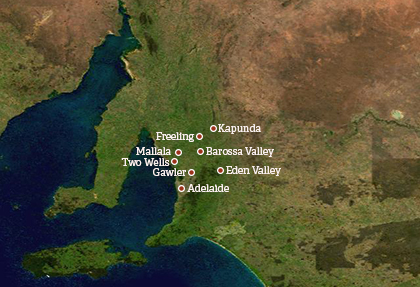 Mallala is found to the west of the region adjacent to the Samphire Coast.  Importantly, it is on the edge of Adelaide’s premium northern food bowl. It includes a diverse horticultural community of growers ranging from very small, low technology greenhouses growing crops such as tomatoes and eggplants, cucumbers and capsicums, and field crops such as potatoes and carrots, through to large, multi-million dollar hydroponic greenhouses.

Not only is there a broad spectrum of technology practised by these growers but there is also a wide diversity of cultural background including Cambodian, Vietnamese, Italian and Greek.  The township of Two Wells /  Mallala is expanding and the recent announcement of approval for the development of approximately 2,600 to 3,400 new dwellings provides a boost for investment in the area. This will drive significant community and economic development for the Mallala Region over the next decade.  Two Wells and the District Council of Mallala offer many opportunities for workers and their families with their proximity to city facilities and the Barossa wine and tourism region whilst remaining, at heart, a rural  town with a country quality of life.

The Barossa region  (also known as  Barossa Light and Lower North) is located approximately 70 km northeast of Adelaide with a total land area of 2,186 square kilometres (about 0.22% of the state). The region enjoys a mild climate, has an attractive agrarian landscape and numerous towns and small settlements. It supports a population of almost 67,000 people and is one of the fastest growing populations in South Australia, mainly due to the success of the wine industry, the range of employment opportunities and the high standard of living the region offers.

The top five contributors to total employment in the region are manufacturing, retail trade, agriculture, forestry, health and community services and education and training. The region has three country hospitals - Tanunda, Angaston and Kapunda, and one District hospital in Gawler. There are two colleges of Technical and Further Education (Nuriootpa and Gawler) and the Roseworthy Campus of the University of Adelaide which is known for its agricultural research, veterinary school and equine hospital.

The top five contributors to Gross Regional Product are;

Expenditure by tourists ($185m) contributed approximately 9 per cent of the total value of exports from the region. The major contributors to the value of ‘other exports’ from the region in 2011/12 were the manufacturing (70 per cent) and agriculture, forestry and fishing (11 per cent) sectors.

For more information on the Two Wells and Barossa region, including employment opportunities visit: here

Our dream has always been to start a business around food and wine, and when we discovered Angaston in the Barossa region, with it’s weekly Barossa Farmers Market, beautiful farm gate produce and an incredible group of like minded people passionate about sustainable farming and ‘buy local’, we instantly thought we could create something here and build a future for our babies, Sofia and Filippo. After all the wonderful places in Europe we have visited we never imagined we would find what we were looking for in Angaston in South Australia