Boasting a combination of pristine coastline, rugged landscapes and an abundance of native wildlife, Eyre Peninsula is like no other region on earth. Whether it’s on land or at sea, Eyre Peninsula is truly Australia’s seafood frontier.
View this article. 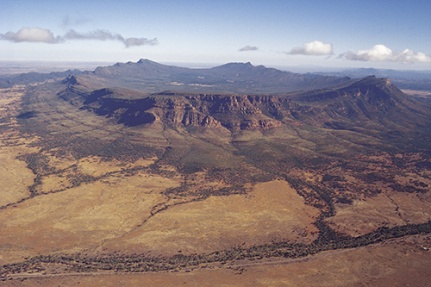 Lift your soul in South Australia’s timeless Flinders Ranges and outback, home to Wilpena Pound and the underground opal town of Coober Pedy. Star gaze, see rare native wildlife, and uncover Aboriginal and pastoral history. For an adventure, drive the South Australian Loop from Adelaide, hike the Heysen trail or 4WD to the Simpson Desert and mostly arid Lake Eyre.

Explore one of Australia’s most incredible natural structures

Flinders Ranges National Park holds a richness of impressive geological features, including the jewel in the crown, Wilpena Pound, a natural amphitheatre of jaw-dropping splendour. Explore the park’s bushwalking trails and scenic drives to experience amazing wildlife and fascinating Aboriginal and European heritage. See even more with a licensed 4WD tour or mountain biking adventure.

At 1.2 million square kilometers, the Lake Eyre Basin covers almost one-sixth of Australia and is one of the world's largest internally draining river systems. The Basin includes large parts of South Australia, the Northern Territory and Queensland, as well as a small part of western New South Wales. The area supports a range of nationally important natural, social and economic values and about 60,000 people live and work in the Basin.

After rain, extraordinarily large flocks of water birds gather in the Basin to breed, attracted by the masses of aquatic invertebrates in the flooded waterways. Abundant and varied fish populations seem to come from nowhere and the calls of the most diverse frog community in Central Australia are well evident. Mound springs, occurring at points of natural water seepage from the Great Artesian Basin, support a number of rare species, many found only in association with these unusual water bodies. Several regions contain rare plants, the snake fauna is unusually diverse, and some small mammals, rare or extinct in the rest of Australia, still occur in the Basin

The Flinders Ranges & Outback is one of Australia’s richest areas of Aboriginal heritage and living culture.

The Flinders Ranges & Outback covers such a vast area of South Australia and so many different environments, it’s no surprise that it is one of Australia’s richest areas of Aboriginal heritage and living culture.

The natural features of the Flinders Ranges are still of strong cultural significance to the Adnyamathanha people and the geology topography, flora, fauna and climate all feature in traditional stories and legends. Port Augusta through to the Southern Flinders Ranges is home to the Nukunu people. You can follow their story in their interpretive centre in the Melrose Heritage Courthouse Centre.

The Flinders Ranges & Outback showcases a range of various Aboriginal experiences. Visitors are presented with the unique opportunity to learn about Aboriginal heritage, cultures and their connection to the land. With a visit to Wadlata’s ‘Tunnel of Time’ you will learn what this land means to its traditional owners.

The opal capital of the world, Coober Pedy

Around 150 million years ago, Coober Pedy was covered by ocean - and when the water receded, the sandy silica minerals from the seabed flowed into the rocky cracks and cavities and solidified over time into multi-coloured gem-stone - opal.

Coober Pedy has evolved into one of the most unique places in Australia and perhaps the world. It's a cosmopolitan town with a population of 3,500 and over 45 different nationalities.

Half the residents of Coober Pedy live underground in dugouts to escape hot temperatures in summer and stay cosy during winter. Underground houses remain a constant 24°C all year-round. Only in Coober Pedy

will you find underground churches and art galleries, plus a golf course without a blade of grass. With its frontier feel and strange lunar- like landscape, Coober Pedy has featured in many films.

The Breakaways are a striking & unique example of arid scenery. From the flat - topped mesas to the stony gibber desert, remnants of millions of years provide a wealth of geological interests and breathtaking views. Looking out over the breakaways it is hard to believe that over 70 million years ago, a vast inland sea covered the area. The region is rich in Aboriginal and European history and is home to an array of native fauna and flora, which have successfully adapted to one of the world's harshest environments. Definitely one of Outback South Australia's best-kept secrets!

To find out more about the great places to visit in the Far North region of South Australia: here